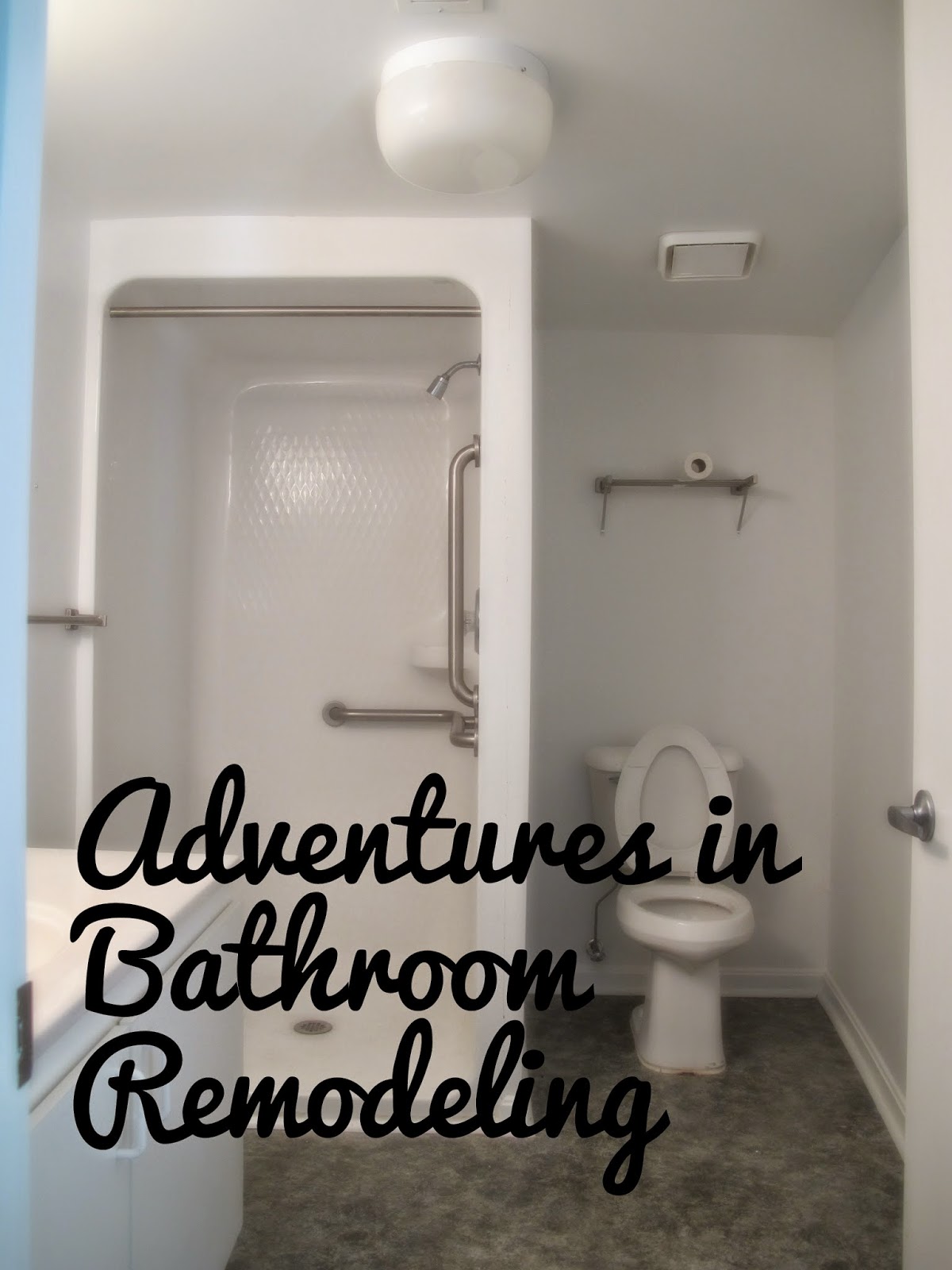 Waaaayyyyy back in 2014 I shared with you my BIG PLAN to remodel the main bathroom in my condo. I made BIG PLANS to share every detail with you on this blog. I told you about picking a contractor, setting a budget. I even shared my design inspiration. Then, well......crickets. I'll admit it-I slacked off on the documentation part. Many things got in the way- delays, an unexpected job change, but, how were you supposed to  know that? You're not. I left you hanging, peeps! I imagine some of you have come back to my site refreshing it everyday in anticipation of the finished product......or maybe not? ; )

But, I am back to make amends, friends. I am ready to share every little bit of my pretty new bathroom. This was a true labor of love-filled with almost exactly what I wanted from the beginning, with a few changes to bring my designer dreams into my everyday budget. It has a few DIY pieces made with my two little hands, and I will be back with a few other posts with even more details. Today, friends, we will start with the BIG REVEAL (cue the confetti poppers, cheerleaders, and Anderson Cooper doing live commentary). I will link to all the supplies I used at the end of the post, so scroll down if you are looking for something similar!

First, a look back to where I started: 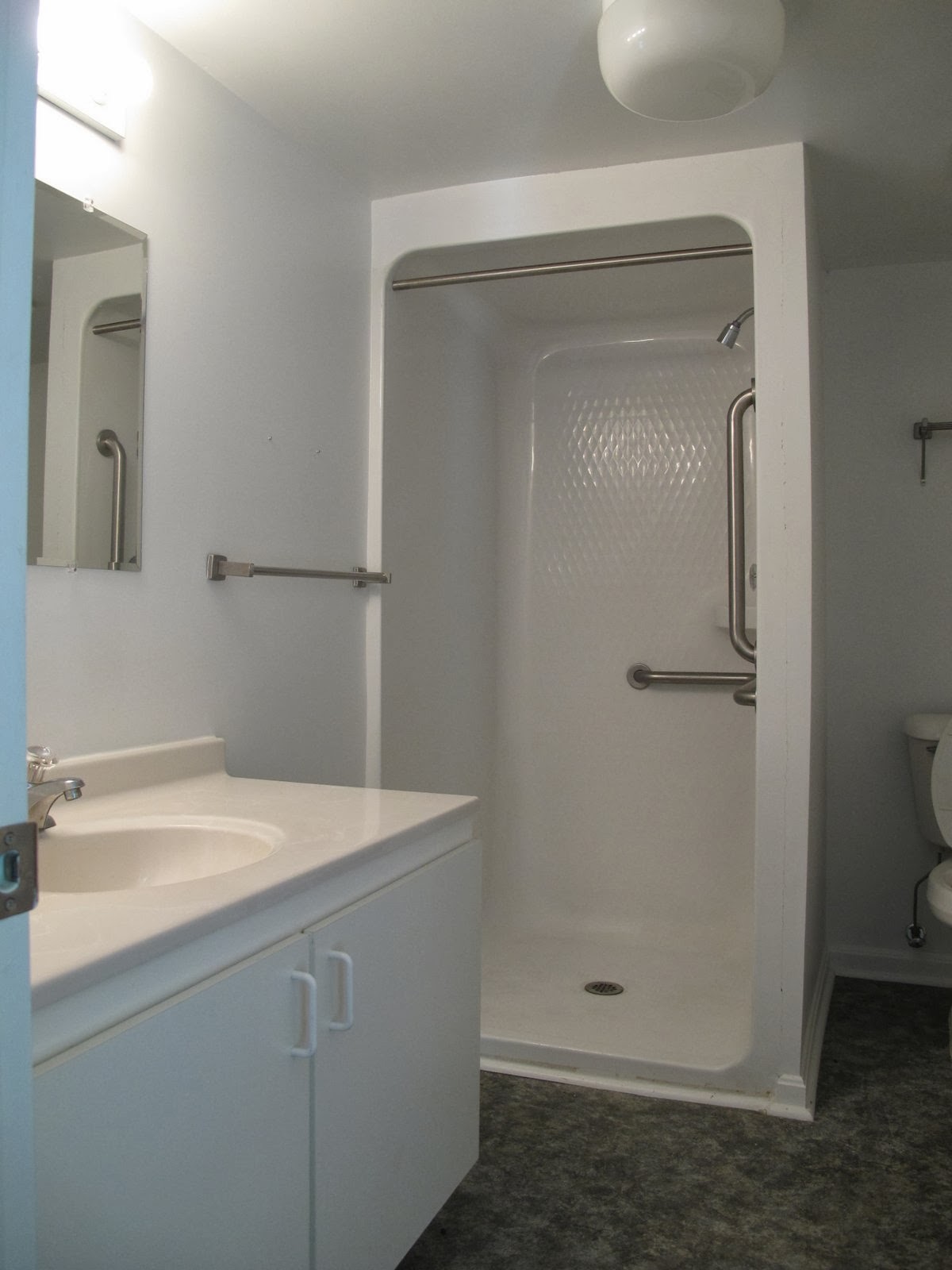 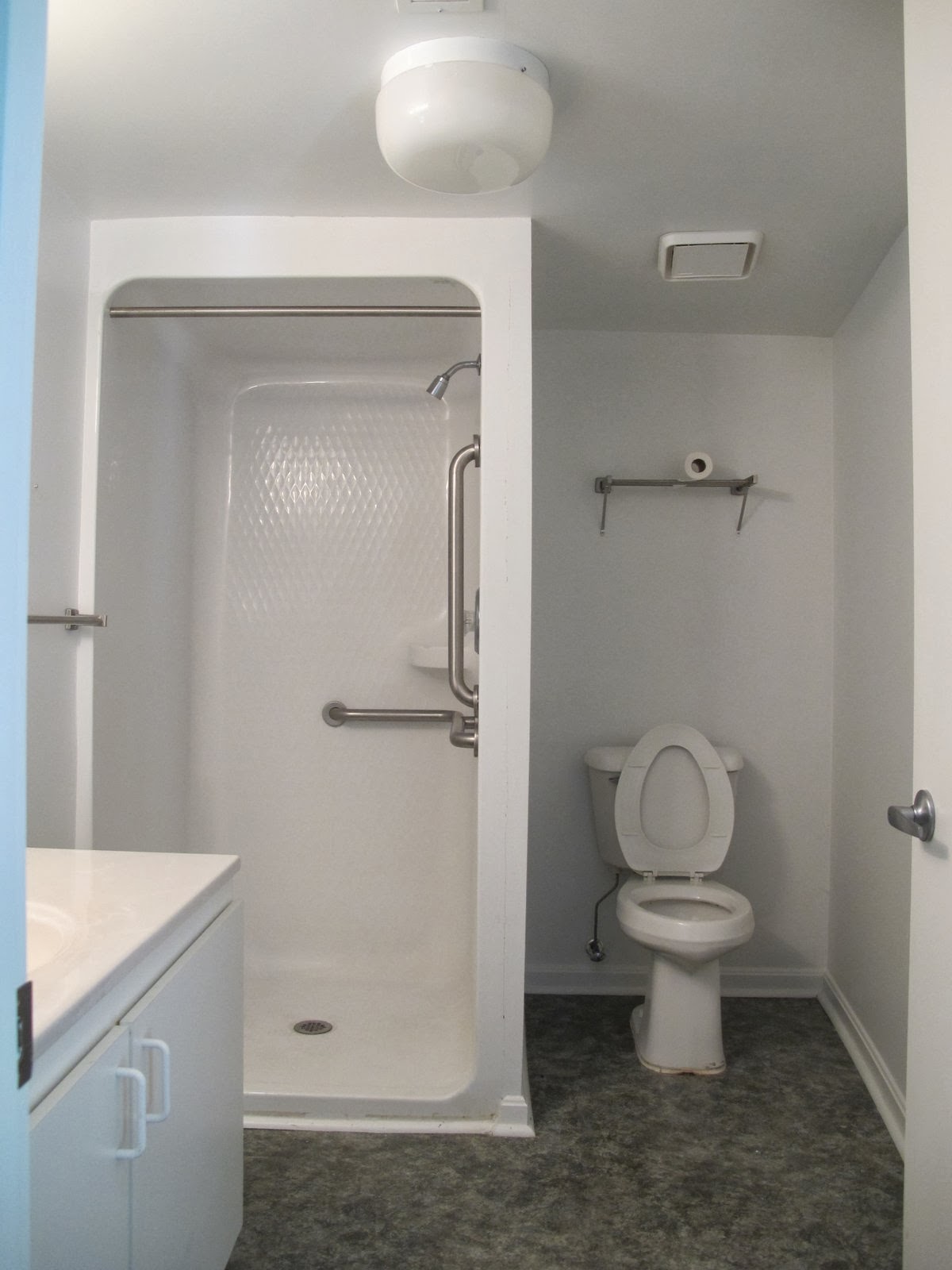 Looking in and to the left slightly. The only thing you can see is the wall to the direct left, the gigantic vanity butts right up to it. 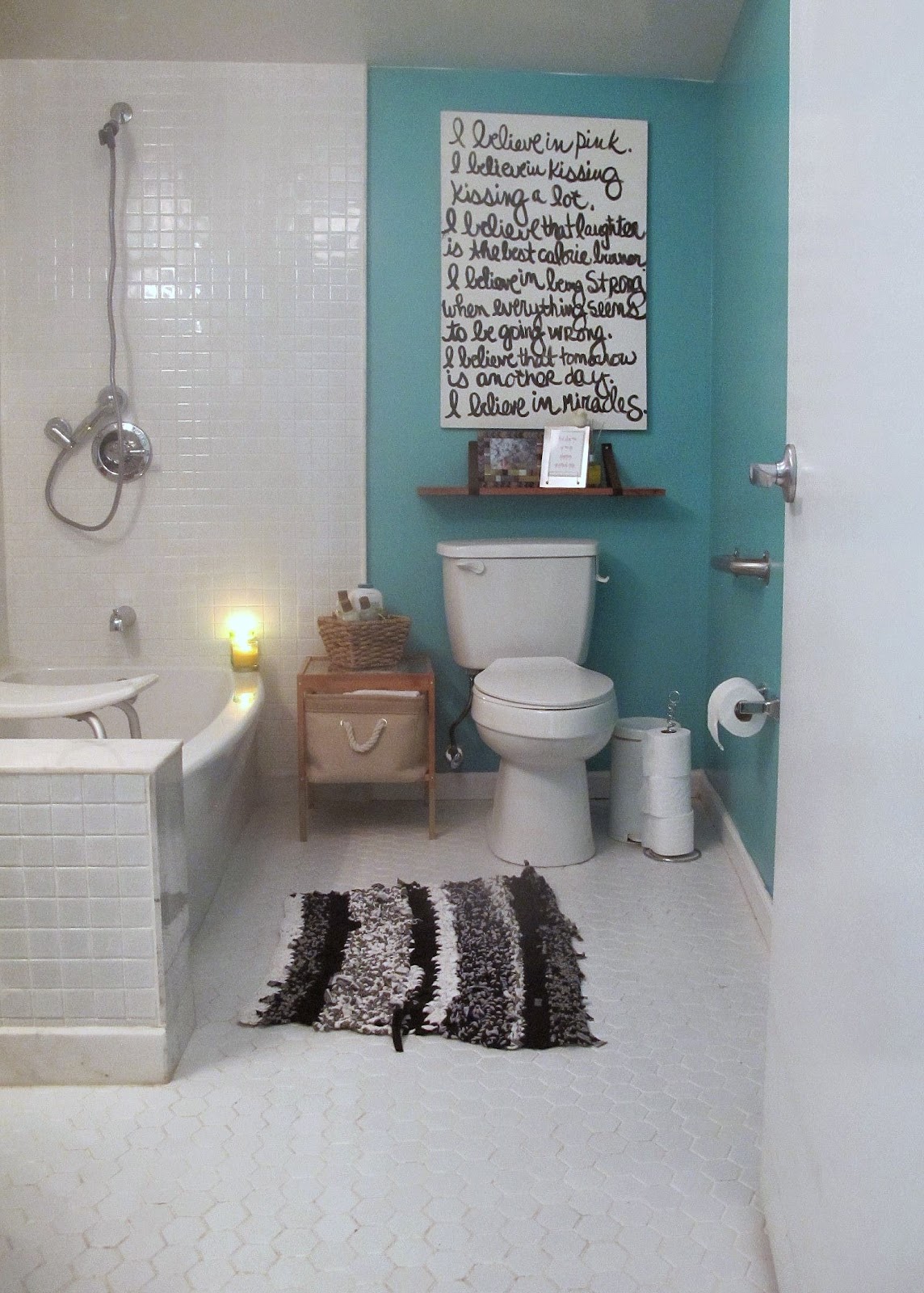 TA DA! First, looking into the room straight on. I chose a pretty basic toilet, nothing special there. The little collection above it makes me so happy every time I see it. I painted this humongous canvas (more on that in a later post) and made the shelf out of scrap wood (more on that later, too!) . That rug? Oh, I made that, too. A little online inspiration went into that project-but that's a story for another day. That little side table is from IKEA and it holds towels and extra personal hygiene stuff. That little basket on top is just some extra toiletries I thought looked nice there. 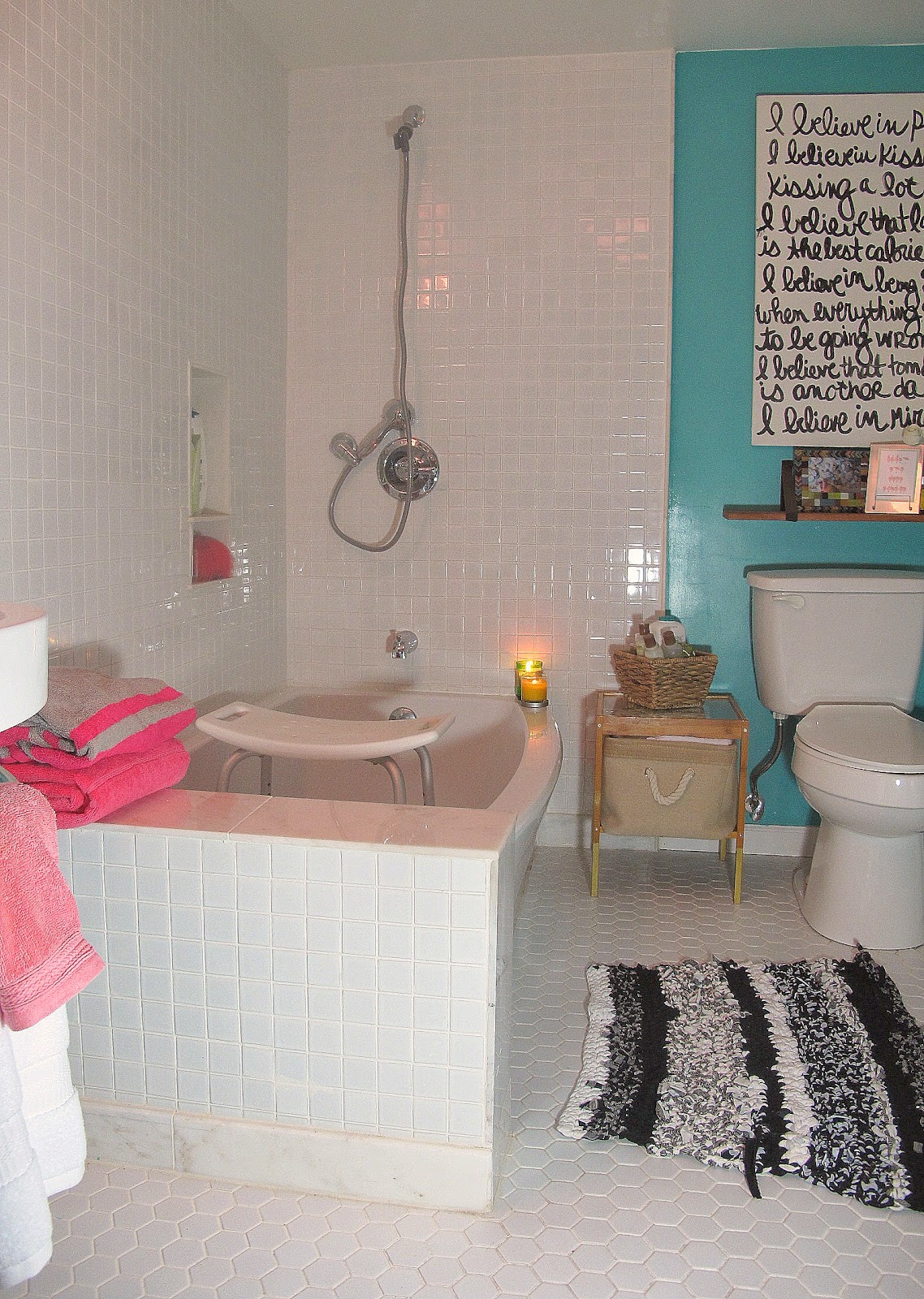 Turning a little to the left. The tub was chosen because of the way it bows out slightly at the top, it's rectangle, with a softness ; ). Also, the side is a little wider, which makes it easier for me to sit on to get dressed or to transfer into the bath.I also asked the contractor to build an 'end cap' I could use to sit on if I needed to. I LOVE the white tile they used on the surround. The flat marble pieces were an extra that my favorite contractors gave me because they thought it would look nice for me-sweet, huh?  I love having a tub more than I can say. That old shower stall was just not working for me, and I think it looks a hundred percent better. If the shower nozzle looks a little weird, it's a handheld shower that I added a clip for so I can reach it. Makes life a lot easier. And, no, your not mistaken, I don't have a shower curtain. Boy, the looks I got when I told people that, lol. But, aesthetically I thought it would clutter the room. I figured if I really missed it, I could always add it later, right? Keep in mind, this condo is really only suited for a single person or a couple, so privacy is not as big of an issue (at least in my mind). Months later and I really don't miss it at all.

Moving right along. Remember the world's most boring and gigantic vanity? Well, yeah, that was the first to go. I felt the bathroom looked so small and the vanity was so extraneous for a condo that is really suited for a single person or a couple. I thought freeing up some of the floor space would allow room for a tub. I don't miss the underneath storage one bit. You'll see the shelves better in the next pic, but I built a set of floating shelves and then used boxes to wrangle all of the stuff I need. I moved the towels to the table you saw before. I realized I had a billion bottles of cleaner I didn't need, and the ones I do need? I moved them to the kitchen cabinet. In this picture (because of the angle) you can really see the exposed pipes, but on an everyday basis I don't think they stick out that much. Or, maybe they do? Any suggestions on how to cover them? 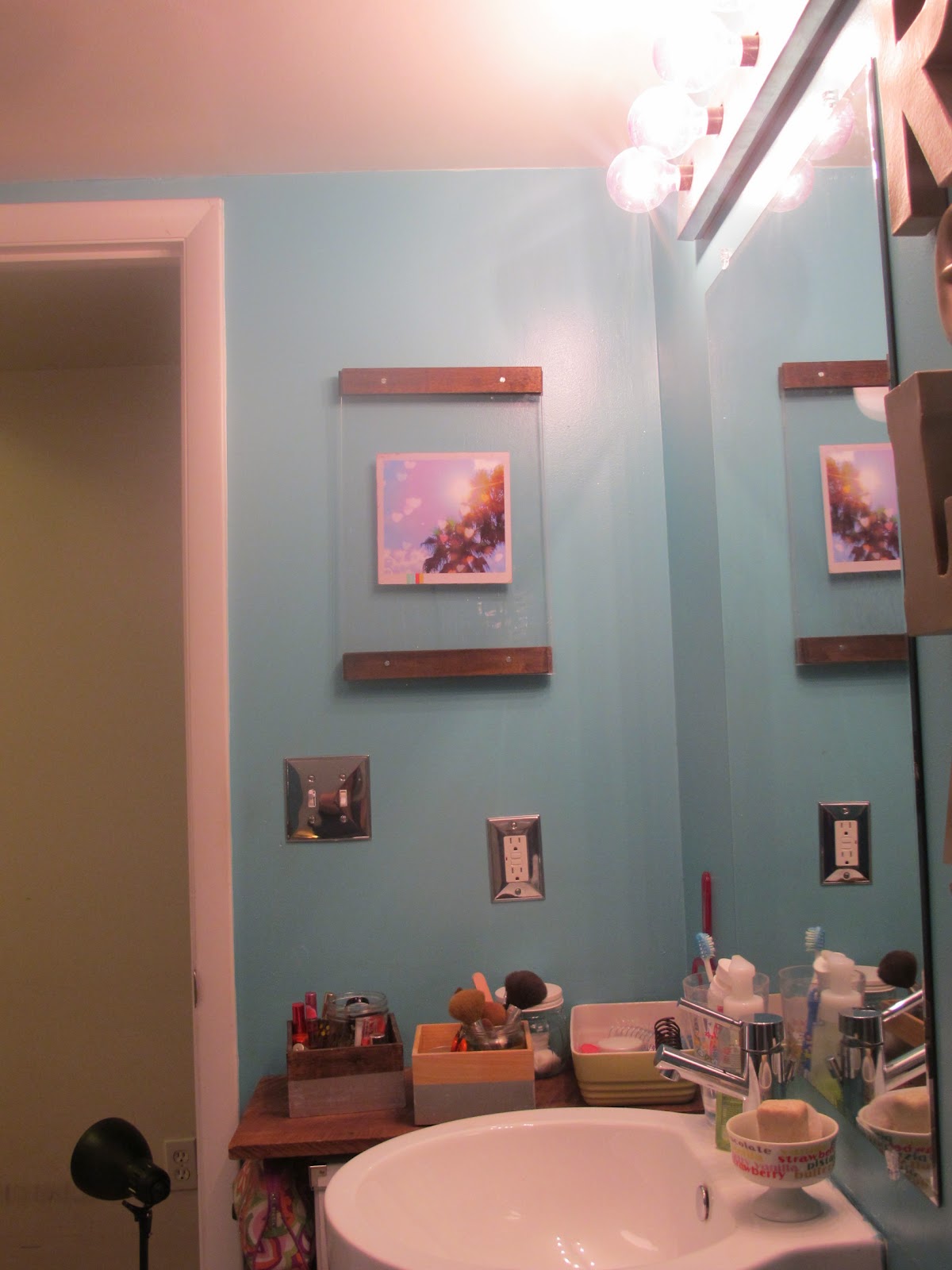 And, back to the door.  The lights above the sink were original to the bathroom, but they were basic white with 1980's frosted white light bulbs. I painted the unit silver and added clear bulbs. A new light fixture did not fit into my budget and the update helped to tie it into the rest of the room.

That palm tree picture? Yep, another DIY post coming soon. I thought about taking some of my stuff off the shelves before I took pictures. Now, I think I should have-that shelf looks like a hot mess! Also, who forgot to move the spotlight? ; )

That's a wrap, folks! Thanks for coming back to see my new bathroom. I really am thrilled with how it turned out. Scroll down to see a bunch of links to everything I used. Feel free to leave any questions in the comments. And come back on Friday to see the first DIY project in the room!