Adventures in Bathroom Remodeling- Picking a Contractor and Setting a Budget 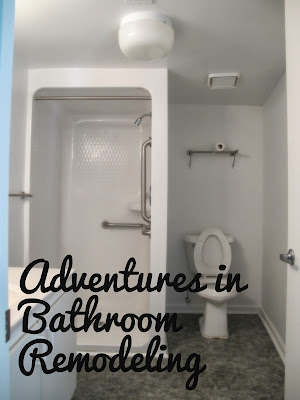 Hello peeps! I'm back for the next edition of Adventures in Bathroom Remodeling.

Today I wanted to share how I went about making my budget and how I chose a contractor. I am by no means an expert on any of this, but there was so much I learned that I think it might others out there taking on their first big remodel project. As I shared in my first post I had a pretty clear picture of what I wanted versus what I needed. This helped me tremendously in both areas. Many people told me that they went way over budget, it took longer than they wanted and they were not happy with how it turned out. I was determined to set realistic goals from the get go. 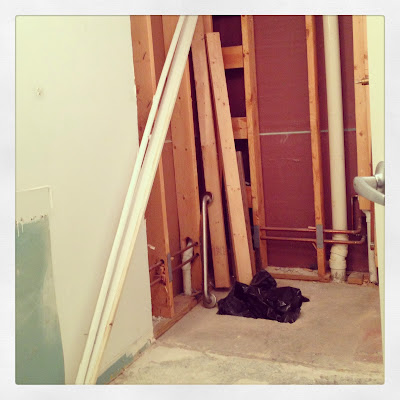 {MAKING A BUDGET}
I had a small budget, and I was determined not to finance anything. I was willing to spend the money on things that would pay off long term. I am really not that great with budgets in general (just ask my checking account, lol) so I looked at what I had in the bank and used that as a guide.  I am going to refrain from being specific, since I have friends and family who read this blog, but I will say it was a couple thousand dollars. I did have to raise it a little in the end. A few lessons I learned:

-  Tile is more expensive than I anticipated, but totally worth the investment. everything I read told me that good quality tile would last a long time and up the resale value of the bathroom.
- Labor can eat up half of my budget. I wish I could have DIY'd more of my bathroom, but I have zero remodel skills. Laying tile is surprisingly labor intensive and complicated. But, again, it will be worth it long term.
- I had to be clear and honest about what I wanted versus what I needed. I really wanted a colorful patterned floor. I needed a bathtub/shower unit that was good quality. I wanted a heated towel rack, but I needed a new toilet. Looking at Pintrest and other sites like Houzz you can get carried away with ideas and add ons.  Several times I had to look at my list and cut something or figure out how to re arrange my budget to accommodate it.
- I had to be willing to be patient. As a person in a wheelchair, I had to wait for someone to: take down my light fixtures, re hang my lights, hang my mirror and help me paint. I could have paid my contractor to do all that, but it would have cost me  more money. I have wonderful friends and family-as long as I was patient they would all come around and get these little things done for me. I also ran out of money to add the glass enclosure I wanted around the shower. After Christmas I will have the money, so I waited. I could finance it, but then I risk having monthly payments, finance fees, etc. That was not for me, so I waited. Sure, having it all done in a month and having a big reveal would be fun, but I needed to be practical, so I learned to be patient.

{FINDING A CONTRACTOR)
No joke, finding a contractor might have been the most frustrating part of the whole process. I know so little about remodeling, and I had a lot of questions. I needed to find someone I could trust. Someone who would not charge me too much and be willing to take some time and explain what they were doing and why. Turns out, I needed to find someone with the common sense to return my calls and emails. Seriously. I learned that contractors are notorious for  not calling you back or dragging their feet. This to me is really rude, but from what I hear pretty common. Along with this, I learned a few things about what was important for me when hiring a contractor:
- Insist on a serviceman who will call you back and return your emails. I refused to accept that someone who was going to take several thousand dollars from me would not take the time to answer all of my questions. I mean really, would anyone else get away with not communicating with you? Your accountant? Your doctor's office? Of course not! I was reasonable with what I expected- I didn't blow up his email inbox with a million little questions. I would group 3-4 into one email. I would call and leave only one voice mail a week. I waited 2-3 days before I called or emailed back. I actually nixed 2 contract companies for not communicating with me and I am so glad I did. The company I hired was awesome and ALWAYS answered my questions to my satisfaction.....even the stupid questions ; ).
- Some companies will book ahead 6 months or more. I did not expect this. I was all excited to get going, then to be told I would have to wait 4 months to even break ground? That's kind of a bummer. The company I hired told me they specifically do not book themselves more then two months ahead. They were retired home builders who only took the jobs they wanted to. I liked that, because from the time we signed the contract it was only 3 weeks before we actually started.
- Ask for a reasonable time frame. My contractor told me it would take 3-4 weeks. He broke down what would happen each week and why it took so long. I thought because it was only one small room it might be a week or two, but once he went through what had to happen when, it made sense. In the end it only took 3 weeks, which was a happy surprise!
- Rely on on recommendations, but not too many. Every knows someone who knows someone who.....well, you know.  I got a half dozen names and companies, that was the perfect amount of names to narrow down. I did also look at the Better Business Bureau, but I trusted the personal recommendations more. Someone suggested Angie's List, but I did't have much luck there. I think that website is a great idea, but I would be hesitant to trust such a big job to anyone I didn't not get referred to personally.
- Ask about the 'extras'.  I learned that alot of supplies and fees wouldn't be on the standard contract, but I was still expected to pay for them. For example- dumping fees for the old shower and vanity. I wanted certain pipes for my faucet, but no idea where to buy them, pick up for my tub and sink. All of these were important to me and I was willing to pay my company to do them, but I wanted to know ahead of time how much it would cost.
- Don't be afraid to question what they are doing and why. This was a little hard for me at first, but I wanted to understand what was happening and what I was paying for. I tried to stay out of their way when they were knee deep in something, but I would look around and comment on whatever I saw. I also changed my mind of the pipes for my sink, when I learned that what I imagined in my head would not work in reality. I tried to compliment everything I saw that I liked (which was a lot) and thank them everyday for their work. That way they felt appreciated and didn't seem to mind when I asked abut what they were doing. Being friendly is important. Yes, they are working for me, and I can technically say whatever, but you ALWAYS get more bees with honey than with vinegar, right?

Next week, I'll be back to share a few in progress photos. Like I said earlier, things moved along pretty quick and I am so glad I snapped pictures along the way. Have a good week!

Posted by Hot Wheels and Glue Guns at 3:14 PM

Email ThisBlogThis!Share to TwitterShare to FacebookShare to Pinterest
Labels: bathroom remodel, It's my life, Look at This

Great post, great knowledge. Hopefully one day we'll have a forever home and I'll be able to use what you taught me. :) xo