Today I wanted to pop in and share two layouts I just finished.

{AMERICANS ONLINE}
The night the news broke about the death of Osama Bin Laden I hopped online and I was not so surprised that Twitter was blowing up reacting to the news. Twitter has become somewhat of a pop culture thermometer to me. People log in and say whatever is on their mind right then. Sometimes that's good, sometimes that's bad. I decided to screen capture part of my Twitter feed from that night to document some of the things people were saying. Some Tweets were serious, some were snarky, and some were-in my opinion, a little inappropriate. No matter what I thought about it, it's a part of my life right now, so it deserved a place in my scrapbook. I have layouts like this before. They're less about a specific event and more about my world's reaction to it, and technology.. I made a pocket behind the teal cardstock to stick a copy of The President's remarks on the event. I thought they were worth documenting as well. 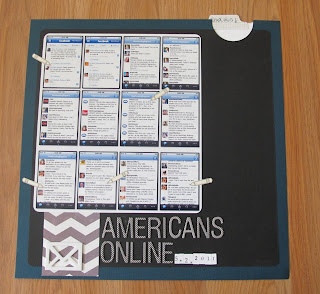 {FESTIVAL WEEKEND}
Sometimes I miss working in the theatre so much. This was one of those weekends. the local theatre here, Actors Theatre holds an annual new plays festival called the Humana Festival. It's right up there as one of the top reasons I LOVE living in Louisville. If you are a theater lover at all, you need to come see some of the productions during this festival! This year I saw almost all of the 10 productions. It was so much fun! I used this page to document some of the shows I saw and the friends I saw them with. Almost all the products are old Basic Grey with a few Thickers thrown in for good measure. 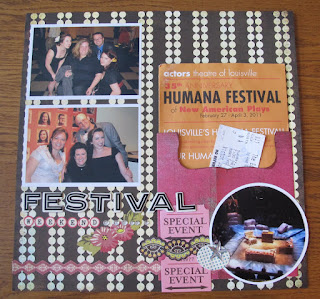 Thanks for stopping by! Hope you have a fun, relaxing Sunday!

Michelle
I made this It's my life on my soapbox