August 10, 2009
Last weekend was THE BABY SHOWER. Anyone within a 100 miles of me knows that my sister-in-law is having TWINS in October-and I am DOUBLE excited! I happily took on the responsibility of putting together a family shower to celebrate. I designated responsibilities and saved the fun ones for myself-hehe, I was on invite and decoration duties. I will share pictures later, but I thought you guys might like some how-tos on the decorations.

{THE PINATA}
We were going to have a handful of kiddos there and I thought they might like to have a shower game all for them. Then I saw this post, and decided to make my own. A little harder than I expected, and definitely took two sets of hands (luckily I had a willing partner in crime).

I started with three blown up balloons, taped together with scotch tape. Then I crafted a bill out of cardboard and taped that to the head. This made the head a little heavy, so we had to keep propping him up with orange cones. =) A bunch of newspaper strips and a paste and water concoction and this is the first layer done. 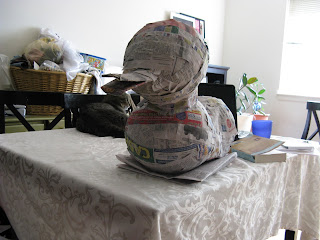 I repeated the process 2 more times, and then spray painted him yellow. I painted the bill and eyes and made a hanger with string. I filled him with candy and some small toys, and voila!! 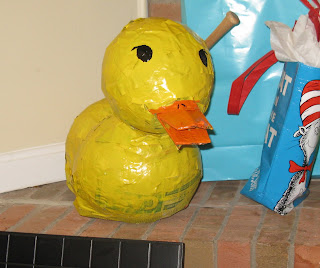 I think he put up a valiant fight, but in the end my three year old cousin Caroline dealt a death blow
a href="http://4.bp.blogspot.com/_YeWn7EmY3Pc/SoCf_R5ovAI/AAAAAAAABqg/pgCGxjh37EE/s1600-h/057+(2).JPG"> 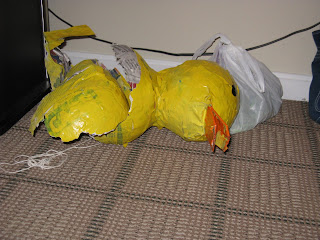 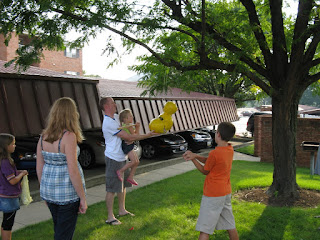 {GARLANDS}
As if the people at Quickutz knew I needed this, they recently released a die cut for the Silhouette that had all sorts of baby shapes, including a rubber ducky!!

I made two garlands, onesies and duckies 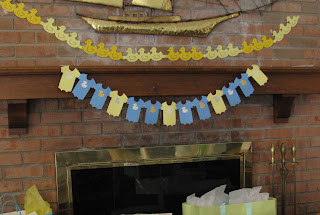 {DIAPER CAKE}
This creation was actually done by my Aunt Carol, but was so awesome I had to share it with you! 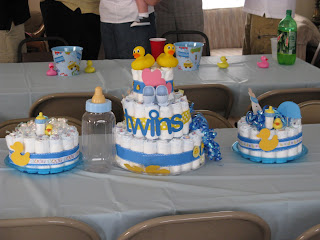 Isn't that so cute!! She used her Cricut to cut out all the accents. A few rubber ducks on top to finish them off.

{INVITATIONS}
Really, the piece-de-resistance. I had so much fun making these! Here is the finished product

I was inspired by a post about pocket cards on the Hero Arts Blog. I wanted them to look like a baby diaper with the details tucked inside. They turned out so cute, I think you should try them for your own invites. I thought I might show you some of the process.

I was trying to be as efficient as possible with the paper, so I made them an even size 4" x 6". For the diaper, I used this paper from Core'dinations. It's a neat paper. The core is colored blue and then covered with a white coating that you can sand, tear, and emboss to show the insides.

I cut the pocket 6" x 12".I scored the length in 4" increments (folded that makes it 4" x 6"). I cut the outside flaps on the diagonal.I wanted the bottom edges rounded, so I folded the pocket and cut thru BOTH layers with my Creative Memories corner rounder. Not a great process, as my complaint about this paper is that it is so thick! That, and the fact that when you sand the white layer, it makes a MESS. I had white powder everywhere.. I do this all the time with thinner paper and it works just great. Here is what it looked like at this point. 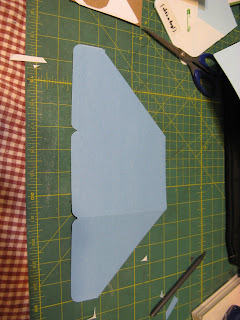 I sanded the outside edges, closed the pocket with a glue dot and then stuck a mini safety pin in to make it look more like a diaper. Sorry I don't have a picture at this point.

To make the inside:

I cut yellow Core'dinations paper into 6" x 8" pieces, scored in half to make it fold. I used my large dot stamp in yellow and then sanded the edges to let the yellow show thru. 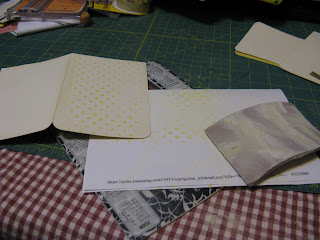 On the inside cover I used this stamp from October Afternoon to stamp a momma and two baby ducks (in a row..hehe). I colored them in with colored pencil (not something I do very often, but very fun). I then typed up all the details and cut a 3 3/4" x 5 3/4" insert for the right side. I wanted to put a little graphic with all the details so I used the same stamp for a sun and clouds. 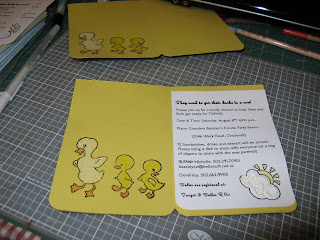 Wonder how I made the cloud look puffy? I had an old tube of Liquid Applique, and paint like substance, that when you heat it, puffs up! Such a cool effect!

So, done and done. Definitely a lot of work, but so worth it. How often does your baby brother give you not one but TWO nephews!! I know, I probably sound really selfish, but I am so excited for them!! They are going to be great parents!

That's all for now, please leave a comment if you have a question about anything I made. Be back with pictures from the weekend soon!
I made this It's my life Look at This My family